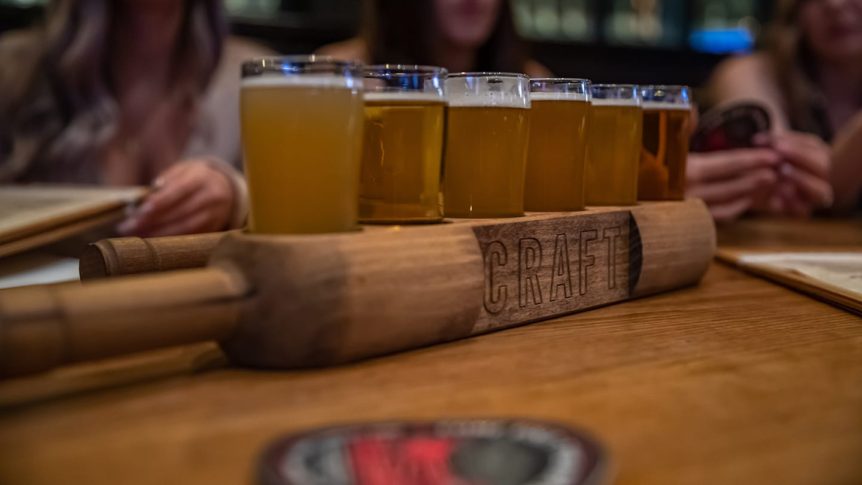 The city of Kelowna offers travellers an impressive selection of craft beer options and breweries, each unique with an incredible selection of tasty offerings for the beer lover. While still offering a “small town” feel, the various brew masters and beer joints of Kelowna offer progressive offerings, amazing atmosphere and more options than one could drink in a weekend. Let’s have a look at Kelowna’s top 5 craft breweries.

Located in the heart of the “packing district” and only minutes from the downtown waterfront, Red Bird Brewing continues to lead by example of what a craft beer joint should be. Focused on the beer and guest experience, Red Bird’s simple yet mouth watering beer options are consistently loved by locals and travellers alike. Offering staples such as the Antipsipation IPA, Lady Of The Lake Lager, and the Tomb Stout among others, the team at Red Bird focuses on their craft and it shows. For the foodies, a food truck is always on site with tasty and well portioned soul food to enjoy with your brew. Throw in some live music and a community setting and Red Bird Brewing is a “must stop” for any beer lover visiting Kelowna. We’re happy to see Red Bird top the list of Top 5 Craft Breweries in Kelowna. 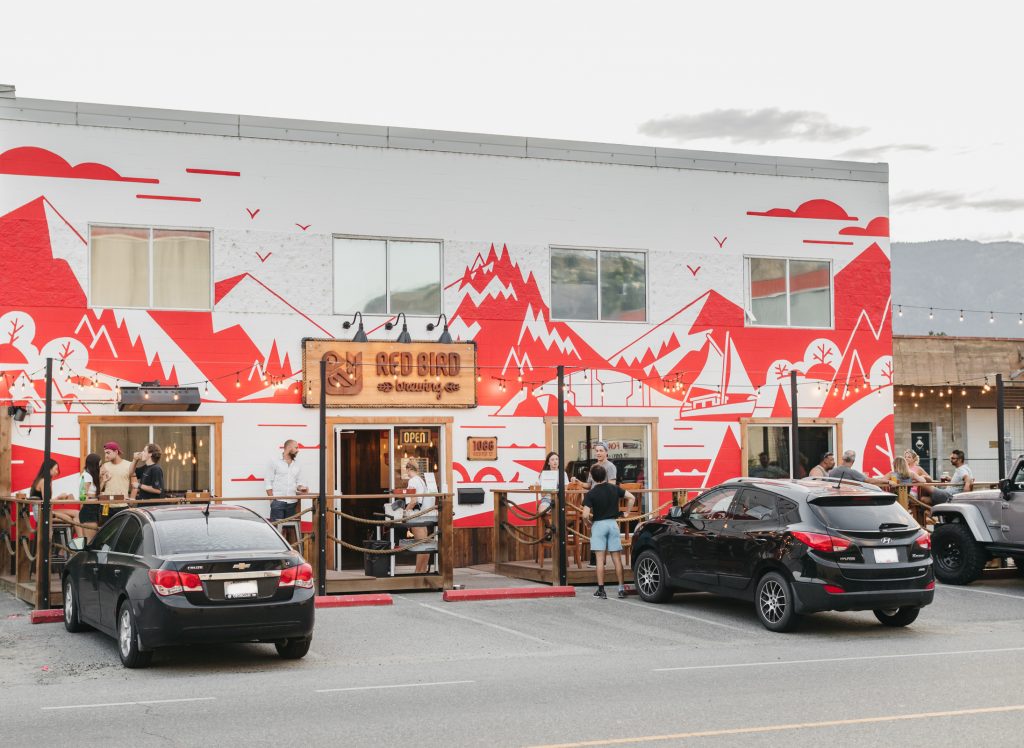 Located along Kelowna’s Lakeshore, Barn Owl Brewing offers a unique spin on the community watering hole. Built within an old barn, the charm and character of this breweries unique architecture and always smiling staff guarantee a good time. Behind the scenes, brewmasters are hard at work scheming up tasty brews such as “Don’t Give A Hoot Pale Ale” and “Wise Owl Nitro Stout”. Once served, head upstairs for some good old fashioned shuffle board and games. If you’re looking for more of an outdoor atmosphere, Barn Owl’s large patio offers a relaxing atmosphere to soak up the Okanagan sun while enjoying some of the cities tastiest beer. For those looking to take their favourites home, you can order any beer off the menu and have it canned on the spot with their large format “Crowlers”. Absolutely a must have for those wanting to share a pint or two on the go or at the beach. 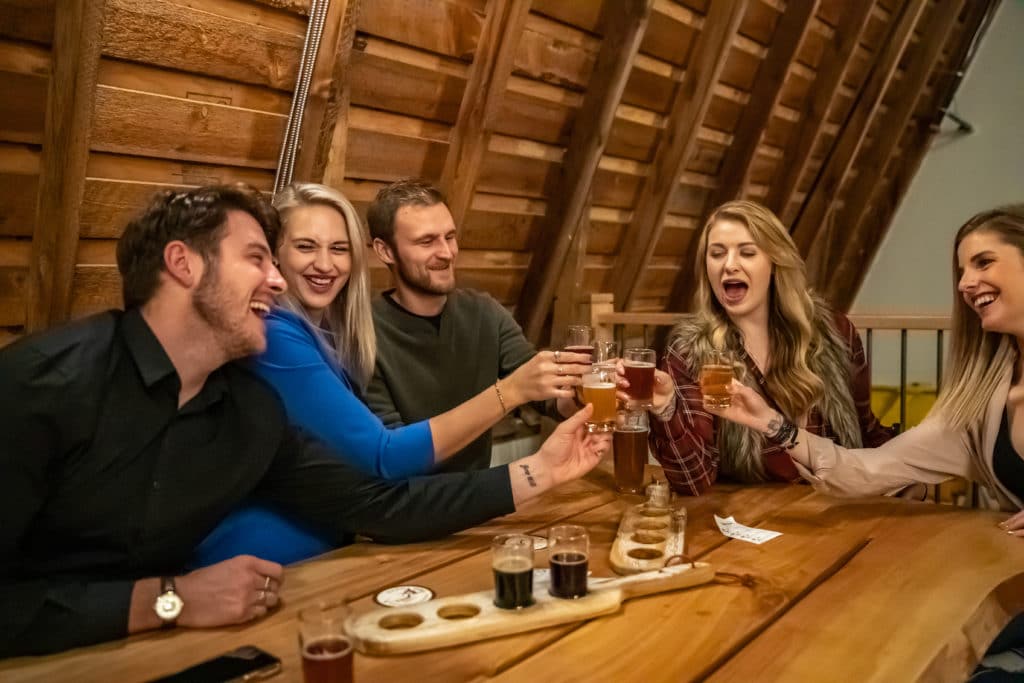 Beer lovers and foodies will love the casual atmosphere, tasty brews and mouth watering food offerings available daily at this Kelowna beer joint. Located in the packing district, Rustic Reel offers over a dozen daily beer options to choose from. Pints or flights, choose your brews and enjoy the incredible modern atmosphere or take your beer outside and enjoy endless sunshine on their massive patio. With one of the largest food menus of any Kelowna brewery and a focus on locally sourced fresh ingredients, the kitchen team at Rustic Reel doesn’t disappoint. May we recommend the Sausage flight or Pork Schnitzel, both pairing nicely with this Kelowna breweries beer options. Yum! 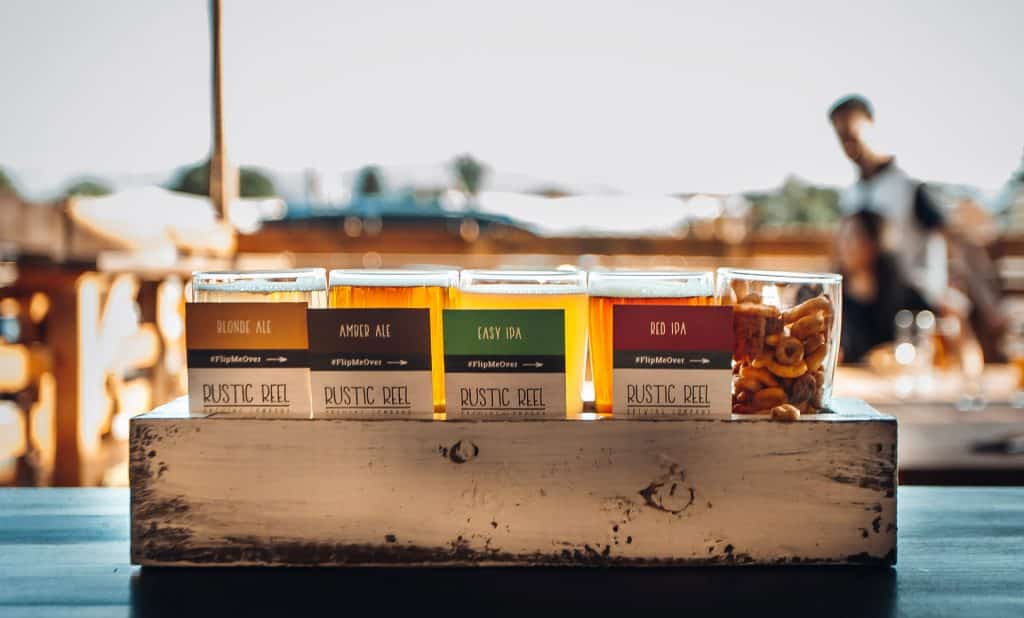 A ‘must go” on any beer tour, Copper Brewing located in the Landmark district of Kelowna offers a bright and cozy atmosphere to enjoy some suds. An ever changing menu of beer, complimented with a deli style food menu (best pickles in the city) and cozy booths all enhance the experience at Copper Brewing. Oh and did we mention the Nintendo? Yes that’s right, old school Nintendo lovers can relive their childhood while throwing back some of the tastiest craft beer in the city. With over 20 beer’s on the tasting menu daily, Copper Brewing offers something for everyone. May we recommend the Rye IPA or the West Coast IPL! 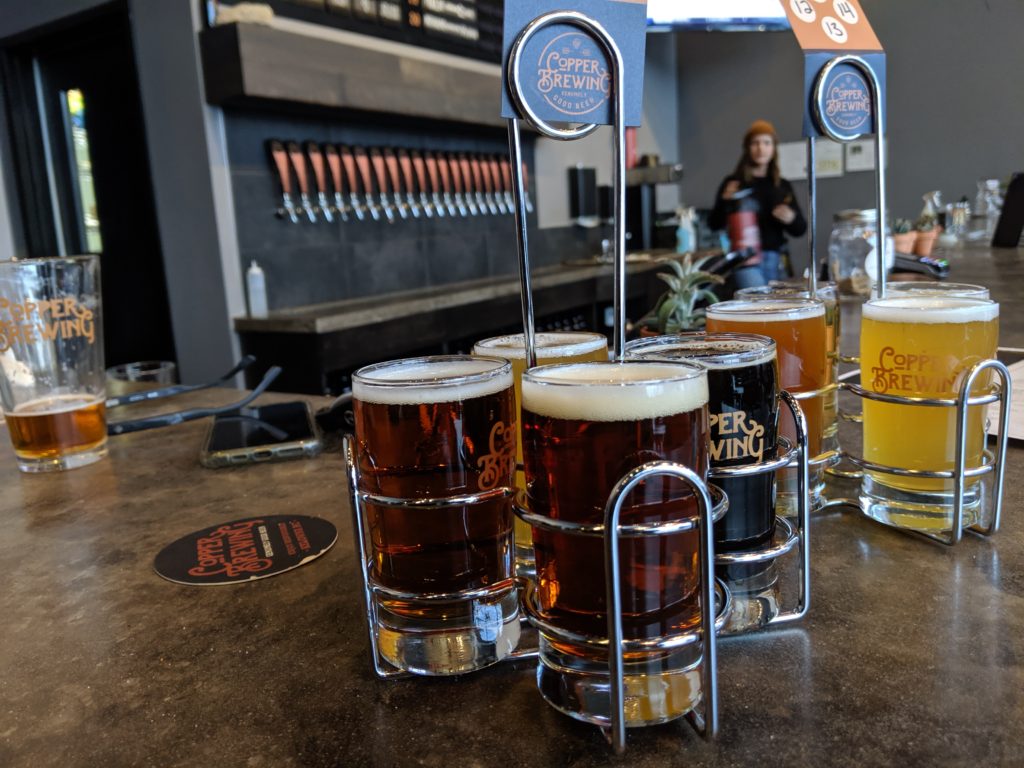 Naturally, a list of Kelowna’s Top 5 Craft Breweries wouldn’t be complete without the brewery that bears the cities name! Located near the University campus, the Kelowna Brewing Company is a hidden gem. A large, traditional bar setting, this brewery and restaurant offers one of the best views and patios in the city. Beer lovers will enjoy their spin on staples such as the Hazy Pale Ale or Willie’s Wheat, or play choose your own adventure with a mystery flight of their small batch beer offerings. Compliment your beer with some of the best wings in the city, while enjoying their patio and some of the best views of any brew pub in the city. If wings aren’t your deal, no worries. KBC’s menu is extensive with an amazing selection of pub fare!

Sure it’s technically not beer, but a list of Kelowna’s Top 5 Craft Breweries wouldn’t be complete without checking out some of the best organic craft cider in the city. Located just minutes from the airport, Upside Cider is quickly becoming a “must stop” location. Only 2 years old, this upbeat cidery features an extensive list of organic cider, wood fired pizza and other local treats. May we suggest the “Sweetheart Cheery” or the “Late Harvest Apple Dry” You won’t be disappointed. Cheery staff, a laid back atmosphere, kick ass food and a new tasting bar all help to create one the most unique tasting experiences in Kelowna.